The Astronomer is a painting finished about 1668 by the Dutch painter Johannes Vermeer. It is oil on canvas and is on display at the Louvre, Paris

This picture is taken from www.elibron.com

Portrayals of scientists were a favourite topic in 17th century Dutch paintings. There is no certain evidence of who posed for the astronomer. Vermeer himself was proposed as a model but it was possibly the scientist Anton van Leeuwenhoek. He is believed to portray the same man in both The Astronomer and The Geographer. Van Leeuwenhoek was a merchant who sold cloth and Dutch inventor of the microscope and he was born the same year as Vermeer. 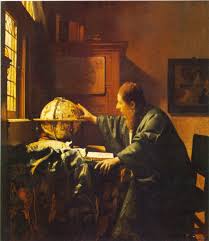 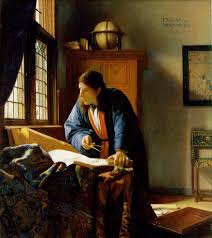 Some Scholars said that the man with straight nose and full lips, posed for both paintings. However, none of the models who posed for Vermeer’s interiors have been identified. As a result, other scholars have supposed that the majority of Vermeer’s characters were members of his family especially his wife and his younger daughters.

As you can see in this painting The Astronomer harmonizes space, colour, and light to convey a single human activity, a unified moment in time. Perfectly staged, the scene is a subtle composite of interlocking diagonal, rectangular, or elliptical fields and has no empty or undefined surface. The composition is not narrative but rather forms the context of a sole figure, frozen in a pose of profound preoccupation.

Another important characteristic of this painting is the meaning of the Globe. This globe presents different and complex constellations. In the centre we can see that Dragon and Hercules and to the right, Lyra. However, on the upper half to the left is the great Bear. This globe reflects the 17th century human fascination for astronomy and science.

Vermeer was well known for painting women. He was a painter of women Male figures have always played a supportive role in most of his paintings, representing a Suitor or a Musical Instructor.  It is only in The Astronomer and The Geographer in which men are portrayed as main figures.

Like many Vermeer characters, the astronomer is placed near a window on the onlooker’s left, which casts a glow on the man of science, revealing youthful freshness, sudden insight, and nervous anticipation. Expressive hands define the geometric space between the sympathetic figure and the celestial globe and drive the forward movement of the body. The desk, framed by a thick tapestry, holds an astrolabe (precursor of the sextant) and a book. On the wall is a circular figure with radial lines.

As a conclusion, I might say that The Astronomer is a true masterpiece that depicts not only a single man but the drawing of a new era and logical thought and scientific revolution. This painting represents the human fascination with the complexities of a world.

A story inspired in Vermeer’s

This is the story of his life. He was about 20 when he started to go crazy. He had always been interested in astronomy and he dreamed of becoming an astronomy teacher so that everybody could learn to appreciate the universe. However, his passion led him into madness.

Roger was born in a little town in the north of Germany. He came from a poor family so he had to start working when he was a child. He and his mother were beaten by his alcoholic father. He spent an unhappy childhood and astronomy provided him a way of escaping from his problems. Whenever he was not working, he was locked in his room looking for the constellation in the globe. He liked imagining a new planet with no sadness and poverty. Nevertheless, every morning when the sun was rising he had to return to his real life.

Years had gone by, and his fascination for the astronomy was increasing. All he knew to speak about was the magnificence of the universe and the constellations. As his interest for astronomy was growing he was becoming a solitary man and he started to go mad. He was now 18 and his mother took him to a mental hospital so that he could get better. Every day, his mother went to the hospital to visit him. She spent most of the day there trying to help Roger to recover his sanity but all her efforts were futile. He was immersed in his own dream. Psychologists were attempting to understand what Roger was thinking about but they found it impossible. He was actually completely mad. One day his mother took him a picture in which he was looking at the globe carefully. Afterwards, she never came back again.

Roger was travelling through different constellations. He had ended up living in a hard reality in order to enjoy an imaginary world full of love and happiness. His first stop was the Little Bear. There, he discovered what friendship was. He made lots of friends who helped him to adapt himself to their habits and lifestyle. He enjoyed talking to them, learning from their experiences and anecdotes. He felt safe and pleased in that new place he was living in. He realised how lovely people can be when they are not surrounded by poverty. Moreover, he understood that life can be funny and beautiful if you spend it with the appropriate people. He was happy though. He stayed in the Little Bear for two years but one day he woke up and he dicovered that he was not there any longer.

It was midday exactly as he left the room and walked towards the lift. It was hot and sticky. He did not know where he was and he thought with a mixture of nostalgia and melancholy about life, being away from his friends in the Little Bear. But he pressed the button to call the lift and waited. He must have sighed loudly because the woman came up behind him as if he was concerned about him, even though we had not met. He looked relaxed and confident and I turned to her and nodded. The lift arrived and he waited politely to let her enter first. They both got in the lift when suddenly it broke down. The woman started talking and told him about everything that went wrong in her life. Roger was astonished. He did not understand what was happening in his life but he was trying to comfort the woman. Just like that they got stuck more than two hours. Roger told her about his life too. He told her that this morning he woke in that place and that he did not know where he was. She explained him that he was now in the Great Bear, 1.864 miles away from the Little Bear.

All of a sudden the lift worked again and the doors opened and they walked into the street. Roger was bewildered. He had never experienced before this feeling of love so he suggested going for a coffee. They spent a great time together and that sentiment started to be reciprocal. They met many times again. Roger was completely in love, a feeling that he has never experienced during his life in Germany. However, once more, everything changed.

It was 3rd of May when he woke up in huge colourful flat in the centre of somewhere. Once again he was perplexed. He went out and he asked to an old vagrant which was the name of that place. “Lyra”, he replied. “It is a small constellation next to the Great Bear. Roger was amazed. He did not know what was happening in his life. He began walking when he found a lottery stand. He went there and he bought a ticket in order to talk to somebody.

Days had gone by when he realised that he had won the lottery. Roger was now a multi-millionaire but people on the street could not guess it. He washed his hair with bad quality shampoo and his jeans and trainers were bought in a sale. Everything about Roger reflects his hard life. He thought that there was no point of wasting money and still not achieving the quality of life he really wanted. His life was not about spending less or more money but spending in a way that reflects his values.

Suddenly Roger started to tremble and sweet. Psychologists came to his room in the mental hospital and they tried to keep him calm. However, they could not save him. Roger was death. His life came to the end and everybody in the clinic was feeling sad. Roger had become an important person in their life because of his sensitivity.

As psychologist said, Roger was travelling through an imaginary world in order to experience feelings he could not achieve in the real life. Throughout this unreal journey he had experienced three of the most important values for the Human Beings; Friendship, love and health. Thus, he was now ready to rest in peace.

11 responses to “The Astronomer”