As you may have guessed after gazing my previous articles, the picture I have been working on during this months has been Vermeer’s “The Milkmaid”. This time, by this article, I will try to develop more in depth the aspects of the picture I analyzed in the 5 minute  presentation  given in class, so that you can understand the artist, the painting and what goes beyond it. Hope you find it interesting!

The Milkmaid is an oil on canvas painting of 45.5 x 41 cm by the famous Dutch painter we have been studying this semester, Johannes Vermeer. The work shows a kitchen maid performing one of her most ordinary duties: the pouring of milk into a container. The picture is held in the Rijksmuseum in Amsterdam, Netherlands. Although the exact year of the painting’s completion is unknown, experts determine the years between 1657-1661 as possible dates. 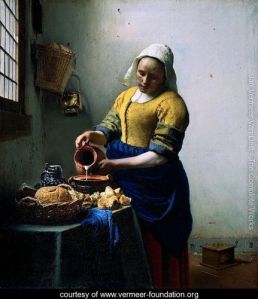 “The Milkmaid” was painted in a time of great wealth and power in the Netherlands, in which trade, art and science developed so much as to be among the most acclaimed in the world. In 1568  The Seven Provinces that signed the Union of Utretcht started a rebellion against Phillip II of Spain which eventually led to the Eighty Years’ War. Before Spain started to   reconquer the Low Countries again, England declared war to Spain. The Eighty Years’ War finally ended with The Peace of Westphalia in 1648, where the peace settlement was signed by Spain and the Republic of   the Seven United Netherlands. The Dutch East India Company settled a Dutch monopoly on Asian trade which prevailed for two centuries. The Dutch also dominated the trade between European countries, by the year 1680 an average of nearly 1000 Dutch ships crossed the Baltic Sea each year.

As we have learned in class, due to the strong doctrines of Calvinism, the artists of the time were not allowed to depicted sex in their paintings. However, Vermeer, along with other artist of the time, knew how to circumvent the censors by leaving subtle symbols that evoke lust or female sexuality. The pouring of milk might have lascivious connotations, the Dutch word for milk “melken” might also be defined as “to sexually attract”. The milkmaid’s body becomes the center of attraction. It was not only the thickness of her waist that attracted the viewer of the time, but also the contrast between the rough leather sleeves with the nudity of her forearm. It seems that Vermeer was well acquainted with the reputation of milkmaids, who were known for their sexual availability. In the end, it is not only the allusions to female sexuality, but also the depiction of an honest and hard working milkmaid that give the picture its romantic or emotional meaning.

To achieve this level of precision, Vermeer used a sophisticated painting technique which was developed and enhanced throughout his life. At first, in his early works he used a thick impasto paint   layer. By using this technique Vermeer puts an emphasis to the materials present in the picture rather than in the characters portrayed. Later he started working with a new technique called “pointillé”, or little dots of paint applied to a canvas in order to obtain a higher level accuracy and detail. Although it is not very clear, some experts maintain that the use of this specific technique along with other visual peculiarities, suggest that Vermeer might have used the “camera obscura”, a precursor to the modern photographic camera, in some of his works.

On the other hand, Vermeer used a few number of pigments if compared to his contemporaries.  However, less than twenty pigments have been detected in Vermeer’s works and ten of those seem to have been of regular usage. As an interesting  fact, in Vermeer’s time each pigment was differed from the other in terms of permanence, drying time and workability. 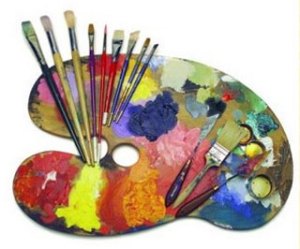 The difficulty of painting with these pigments was that many of those were often not compatible   with each other and had to be used separately. Although it is unlikely that Vermeer had every pigment in his palette when creating one of his works, it is possible that he had the pigments needed for each part of the    painting he was working at.

If we were to analyze the most important parts of the picture, we could start from the face of the milkmaid. it is important to focus on the light coming from the window and reflecting directly  upon her face in shadows and pale scales therefore, creating an effect of three-dimensionality. For the face Vermeer used small touches of paint like reddish brown, white, light ocher and  brown combined all together. The window becomes another central theme of the picture, providing the portrait with light and luminosity. Vermeer gives importance to little details, thus we  can see a broken piece of glass or the irregularity of the window frame. 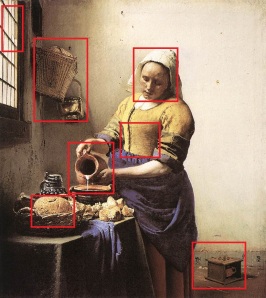 The basket and the copper pail next to the window are elements related to the thematic of the painting: the pouring milk. Both being objects used when shopping in the market. The basket is painted using the white, ochre and black, which eventually mingle to adapt to the form of the basket’s wicker.  The milkmaid’s dress is said to be a winter dress due to the amount of layers it has. She wears a robust leather top and a blue apron over a heavy red wool skirt. Taking a close look at the milkmaid’s garment we can see that it was painted applying thick and quick dabs of yellow and brown pigments to give it the rough texture required ( the impasto technique again).

The jar, the vessel, the pieces of bread on the table and the care with which pours the milk are elements that give great meaning to the final composition. These elements  suggest that the woman  was making curd; this might be a possible reason to explain why the milkmaid is pouring the milk with such care. The slightly porous texture of the stoneware and the  “pointillés” used for  painting the bread, give the picture an extraordinary luminosity and lifelikeness.

The decorated tiles in the lower part of the wall behind the milkmaid, served as a skirting that  protected the plaster from the daily damage of brooms and were made tiny works of art of the finest  porcelain. On one of the tiles a Cupid can be appreciated which leads to two different schools of  thought, one supporting an amorous interpretation of it and a more skeptical one, who believes  that those Cupid were symbols often used in the Dutch houses of the time.

To end up with this article it must be said that  the identity of the milkmaid has been a matter of debate for  critics. Some of them have speculated that it was Vermer’s family  maid (hrough some  documents of 1663 it is known her existence and character). In addition, as some of us have mentioned in our Facebook page “Johannes Vermeer’s influence and inspiration ( a view from  Deusto)”,  it is largely known that many of Vermeer’s paintings, after having been exposed to X-rays, have revealed some items which were painted over.  In the case of the picture I have been  analyzing, a clothes basket can be found near the bottom of the painting, behind the maid’s red skirt!

One response to ““The Milkmaid”-by Johannes Vermeer”