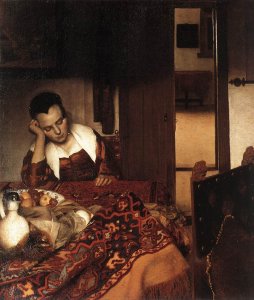 This picture called Girl Asleep, also known as A Woman Asleep, A Woman Asleep at Table, and A Maid Asleep, belongs to the collection of paintings of the Dutch master Johannes Vermeer.

This was one of the paintings of the collection of Vermeer sold on May 16, 1696 from the estate of Jacob Dissius. It is believed that the collection was originally owned by his father-in-law, who lived inDelftas Vermeer’s major patron.  After Dissius, the owner of the painting became John Waterloo Wilson. It was sold the year1881 inParis, when the Sedelmeyer Gallery inParisbought it and sold it the same year to Rodolphe Kann, also ofParis. Kann owned the work until 1907 but sold to Altmanit a year later and was exhibited inNew Yorkin 1909. Altman owned the work until 1913, when it passed into the hands of the Metropolitan Museum of Art where we can find it nowadays.

Before Vermeer started to create his famous interior paintings, he tried with different styles. He painted some Biblical themes, paintings that have to do with Classical mythology and one “bordello” scene which belonged to popular genre in the 1620s and 1630s. After these different styles, he tried painting interiors, which consisted in the modern way of painting of those years and one of his first paintings was The Maid Asleep.

After this brief introduction about the painting, now, I am going to explain some of the main features of Vermeer’s creation:

A corner of a wall map

Even if this picture is not one of the best examples that show this corner, we can assume that this area represents a corner of a wall map. The map was a relatively cheap decorative solution for the bare walls of the household. Here, in this picture, the maps hanging rod is more clearly depicted that the map itself.

Here we have some other paintings that show this corner in a more detailed way:

During this period, the chair is not merely a physical support and an aesthetic object; it is also an indicator of a social rank. Vermeer employed two different types of chairs in the painting which he never did again.

The chair in which the lady is, is the typical Spanish chair. The word “Spanish” refers to a type of chair with leather covering made originally inSpainwhile the foreground chair was a later addition to the original concept of the composition. These elegant chairs were painted in most of Dutch interior paintings.

The vista opening into another room

The vista opening into another room, called also doorkijkje, appears in a number of Dutch interiors including the Idle Servant by Nicholaes Maes which with no doubt served as Vermeer’s compositional model: 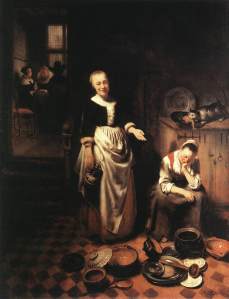 Vermeer employs the doorway inside the same interior to create a sense of spatial depth and emotional depth and as a boundary which divides the viewer of the painting and the figures who are being viewed.

Here we have another example:

The painting on the wall

Even if in this Vermeer’s creation we can only see a small part of the painting, here we have a copy of the whole painting:

This figure has been associated with two contemporary images: on the one hand we have Otto van Veen’s popular Amorum Emblemata and n the other hand we have Cupid holding up a card, in the style of Cesar van Everdingen. Vermeer must have been interested in Cupid painting since he employed it as a background element in The Girl Interrupted at Her Music and the Standing Lady at the Virginals: 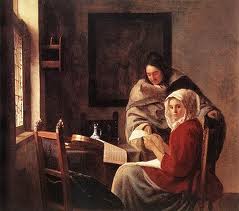 Here we can ask ourselves two different unsolved questions: is the woman depicted in the picture a maid or a mistress? And is she asleep, drunk or depressed?

According to the Dutch costume expert Marieke de Winkel, who has examined the costumes of Vermeer’s works, in this painting, the maid wears a silk jacket and a pointed black cap called a til together with a pair of pearl earrings, all refined clothe that belongs to the elevated social class. Besides, some art experts believe that the woman is Catharina Bolnes, Vermeer’s wife.

According to the second question, X-radiographs demonstrate that Vermeer had more of a story to tell and the even if now they are eliminated, before, on the table lied two glasses with a wine jug. So even if the real title of the picture says that the woman is asleep, there is no any clear evidence to answer this question.

The modern painters of the period such as Van Eyck, Lotto and Vermeer, constantly depicted carpets fromTurkeyandIran. These carpets became very popular in the 16th and particular in the 17th century as decorative objects, usually laid over tables or chests to avoid wearing them down. We can find these oriental carpets throughout nine of Vermeer’s painting and even if they look alike between them all of them are created with different patterns.