Vermeer is known to have been extremely conscious about the real nature of colour, and about the fact that objects change in different circumstances and under different lights. In the film “Girl with a Pearl Earring”, this sharp consciousness is represented through a conversation between the painter and Griet, where he asks the young maid about the colour of the clouds. Her reaction is similar as ours would have been: “White”. However, she soon realises that the answer is not as straightforward as she had thought, and discovers that the clouds actually reflects the colours of the world that expands beneath them. 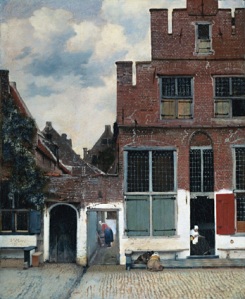 “The Little Street” is another example of this for, though red is apparently the predominant colour, we realise that most details contain blue: the cracks on the wall, the pavement, the woodwork of the windows, the tree at the left, etc. Appart from Vermeer’s mastery, this is also a sign of his economic status. Art historias from UCL, quoted in Science Blog (accessed on June 5th), pointed out that lapis lazuli was a very expensive material in the 17th century, and that unlike most painters, Vermeer used it in the representation of materials like wood and chairs. This contrasts with the generalised belief that Vermeer belonged to the lower-middle class.

4 responses to “Treatment of Colour in Vermeer’s Paintings”